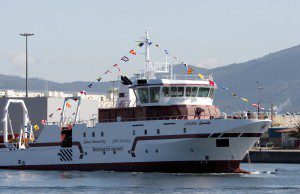 The model research facility Janan – named after the island located in the western part of the Qatari peninsula – was donated to the University by H.H. the Heir Apparent Sheikh Tamim bin Hamad bin Khalifa Al-Thani. Underlining a real commitment to improving sustainability, it will be used by the university’s Environmental Studies Center (ESC) to advance critical marine environmental studies and research in Qatar and the wider Gulf.

With Qatar almost surrounded by water from three directions, Janan will address the pressing environmental problems that arise especially from human and industrial activity that threaten marine life particularly the hawkbill turtles, coral reefs, and oysters, and the seabed. The vessel is equipped with a remote-controlled submarine, and can carry out a variety of surveys – to monitor earthquakes, seabed movements, and marine radioactivity. It will also maintain and build on a comprehensive database that will identify and analyze conditions prevailing in the marine environment.

Boasting a length of 42.8m and breadth of 10m, the vessel can sail for 21 days, and can accommodate a total of 30 technical, scientific and research staff. The ESC team, students pursuing environmental studies, and local and regional researchers will have the use of the vessel’s impressive facilities. Janan is equipped with two main engines, allowing it to work near oil and gas platforms, has the ability to function on generators without relying on the major engines, and contains an advanced system to stabilize the vessel using satellites. It has five sophisticated research laboratories, a sewage treatment unit, water desalination plant, an ER for medical emergencies, and a diving room.
The vessel arrived at Doha port on January 15 this year at the end of a month-long journey crossing the Atlantic Ocean, Mediterranean Sea, Suez Cannel, Red Sea, Arabian Sea and through the Arabian Gulf.

QU President Prof. Sheikha Abdulla Al-Misnad said: “It goes without saying that Janan is a remarkable scientific achievement that adds to our mission and vision. It is not just a vessel – it launches a new area of research that is expected to attract new scholars who will conduct advanced studies in Qatar’s waters and those of the Gulf.”

Janan’s distinctive features were developed by a team comprising QU leaders, navy experts, scientists, and researchers, and was built to specification in Vigo, Spain by Freire, the world-renowned manufacturer in the shipping industry, mainly in scientific research vessels.

With the addition of Janan to its committed efforts in research and the environment, Qatar University continues to take the lead in articulating the goals stated in the Qatar National Vision 2030 and the National Development Strategy, which prioritize research towards developing a knowledge-based society and preservation of the environment for future generations.