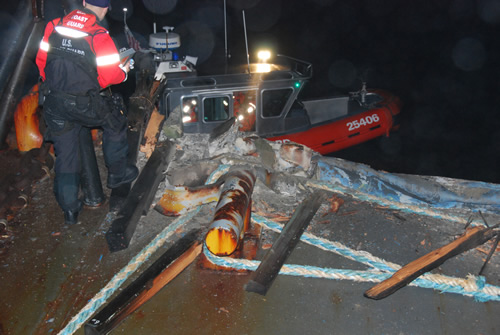 SAN FRANCISCO, Calf. – The United Stated Coast Guard is responding to a tug and barge allision with the Richmond-San Rafael Bridge.  At approximately 6pm the tug and barge were headed outbound from Rodeo when it struck the east piling of the west span of the Richmond Bridge. The barge capacity is 65,195 barrels of heavy black oil and the ship’s crew reported no pollution on scene.  Coast Guard boarding teams and small boat are on scene verifying that no pollution was released into the environment and the Coast Guard investigation has begun.  All affected city, county and state first responders in the surrounding area including California Department of Fish and Game Office of Spill Prevention and Response, Richmond Police Department HAZMAT, California Office of Emergency Services, CAL TRANS, and California Highway Patrol have been notified and several of these agencies are responding to this incident. The companies contracted two oil response vessels were on scene within an hour of the allision. USCG District 11

Our friends Jim Herd of the SFist and Carl Nolte of SFGate have further coverage of the incident.