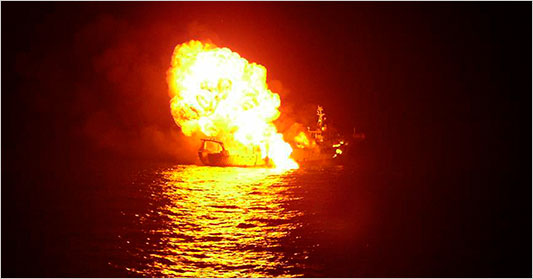 Just when we thought things couldn’t get any more chaotic in the Gulf of Aden, the ‘pirate mother’ ship that was sunk last week by an Indian Navy warship is now being reported to be a Thai fishing trawler.  CNN reports:

Fourteen sailors are still missing from a Thai trawler that was sunk last week by the Indian navy as a suspected pirate ship, the vessel’s owner said Tuesday.

One crewman was found alive after six days adrift in the Gulf of Aden, and one is confirmed dead, said Wicharn Sirichaiekawat, owner of the Ekawat Nava 5.

Last week, India’s navy reported that the frigate INS Tabar had battled a pirate “mother vessel” in the gulf November 18, leaving the ship ablaze and likely sunk. Wicharn said that vessel was his ship, which was in the process of being seized by pirates when it came under fire.

Indian authorities insisted that their ship had acted against a pirate vessel that had threatened to attack the Tabar.

“We fired in self-defense and in response to firing upon our vessel. It was a pirate vessel in the international waters, and its stance was aggressive,” said Commodore Nirad Sinha, a navy spokesman. He said the ship the Tabar fired upon was laden with ammunition.

The image above, released by India’s Defense Ministry shortly after the incident, is reported to be of the vessel that was left ablaze.