Press Release – Foss Maritime Company – Cook Inlet Tug & Barge (CITB), an independently managed subsidiary of Foss Maritime Company, announced today that operations on Alaska’s North Slope are officially underway for the 2019 ice-free season. Three newly acquired tugs, along with barges and shore equipment, will be operating out of Prudhoe Bay for approximately the next three months. 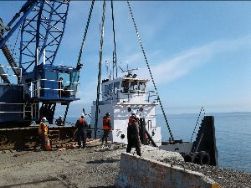 “It is great to see these vessels on the water and ready to work,” said Jeff Johnson, President of CITB. “These shallow-draft tugs and barges are ideally suited for work on the North Slope waterways and the Western Alaska markets.”

The three newly acquired tugs include the Sag Wind, the Kuparuk Wind, and the Kavik Wind, each of which are 64 feet long, 27 feet wide, and with a very shallow draft of only 3.4 feet. They are each powered by three 1095 HP CAT 343D engines.

“The ice-free season in Prudhoe Bay is short, so we’re glad to have such capable vessels available there to support the oil and gas industry as well as construction activities on the North Slope,” said Johnson. “These versatile workhorses help round out Cook Inlet and Foss operations in Alaska.”

This resident equipment and existing trained mariners on the North Slope operations further expand CITB and Foss operations in the Arctic, and complements our harbor towage, oil and gas support services, mining and construction support, and offshore marine transportation services.