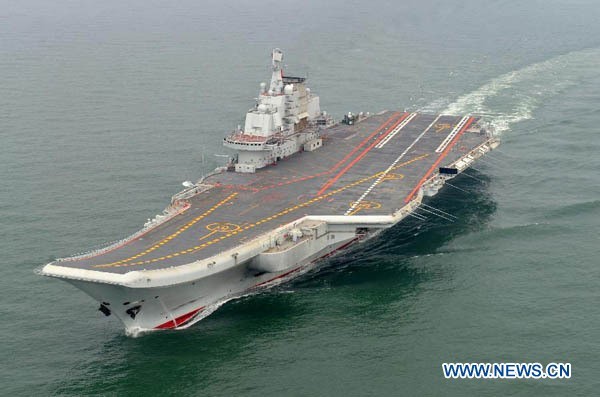 (Bloomberg) — China’s first aircraft carrier, built with the hull of an unfinished Soviet-era ship, was handed over to the navy and formally commissioned this morning, the defense ministry said.

The 65,000-ton vessel, named the Liaoning, enters operation after months of sea trials amid a dispute with Japan over islands claimed by both sides. Chinese President Hu Jintao and Premier Wen Jiabao visited the ship today after it was commissioned, the state-run Xinhua News Agency reported.

The carrier will enhance China’s warfighting and defense capabilities and “promote international peace and common development,” China’s Defense Ministry said in a statement on its website today. China has the world’s second-largest defense budget after the U.S. and depends on maritime commerce to ship its goods across oceans and to import oil from countries including Saudi Arabia, Iran and Venezuela.

“It is natural that China should have its own aircraft carrier,” Rear Admiral Yang Yi, the former director of the Institute for Strategic Studies at the military’s National Defense University, said in an editorial in today’s English- language China Daily newspaper. “While China is facing the threat of various external security challenges, the development of its aircraft carrier has become the common aspiration and will of the entire nation.”

The dispute over the islands sparked street protests and saw China deploy patrol vessels to waters surrounding them. The People’s Liberation Army Navy commissioned the carrier today in a ceremony at Dalian Port in China’s Liaoning province, the Xinhua News Agency reported.

The ship, about two-thirds the size of the U.S. Navy’s newest aircraft carriers, was originally intended to be the Soviet Union’s second main battle carrier when construction began in the 1980s, the U.S. Office of Naval Intelligence said in a 2009 report. Dubbed the Varyag, it was still unfinished when the Soviet Union broke up in 1991. Its sister ship, the Admiral Kuznetsov, is the Russian navy’s flagship.

Ukraine inherited the Varyag and sold it to China in 1998. The hull arrived in 2002 in Dalian, site of China’s largest shipyard, the report said. In 2009 it was in plain view during its refurbishing in drydock about 600 meters from an IKEA furniture store.

Carrier flight operations require years of training. China built a mockup of the Varyag on the side of a lake in the inland city of Wuhan to train flight crews. The U.S. has 11 carriers on active duty and two, the Gerald R. Ford and John F. Kennedy, under construction, according to the Navy’s website. All but one of the U.S. carriers displace at least 100,000 tons.