The U.S. Department of Defense has confirmed that the M/V Cape Ray (T-AKR 9679) was deployed from Portsmouth, Virginia on Monday for its mission to the Mediterranean Sea where it will be used to destroy Syrian chemical weapons at sea.

Over the last several months, hundreds of government and contract personnel have worked to prepare the vessel to neutralize Syrian chemical materials and precursors using proven hydrolysis technology according to procedures and standards set forth by the Organization for the Prohibition of Chemical Weapons (OPCW).

Officials have described what they called a field-deployable hydrolysis system, or a system that uses heat, water and bleach-like chemicals to turn some chemical weapon components into low-level hazardous waste that can be commercially stored in accordance with environmental laws. The nearly 650-foot-long ship is travel to a yet-to-be specified location in the Mediterranean, where it will take on about 700 metric tons of both mustard gas and “DF compound,” a component of the nerve agent sarin gas. Specialists will then use two new, recently installed “field deployable hydrolysis systems” to neutralize the chemicals.

Officials said previously that aboard the Cape Ray will be 35 mariners, about 64 chemical specialists from Edgewood, Maryland, a security team, and a contingent from U.S. European Command. It’s expected the operational portion of the mission will take about 90 days. Also aboard the ship are two Field Deployable Hydrolysis Systems units (shown below), which will operate 24 hours a day in parallel to complete the chemical warfare agent neutralization mission. 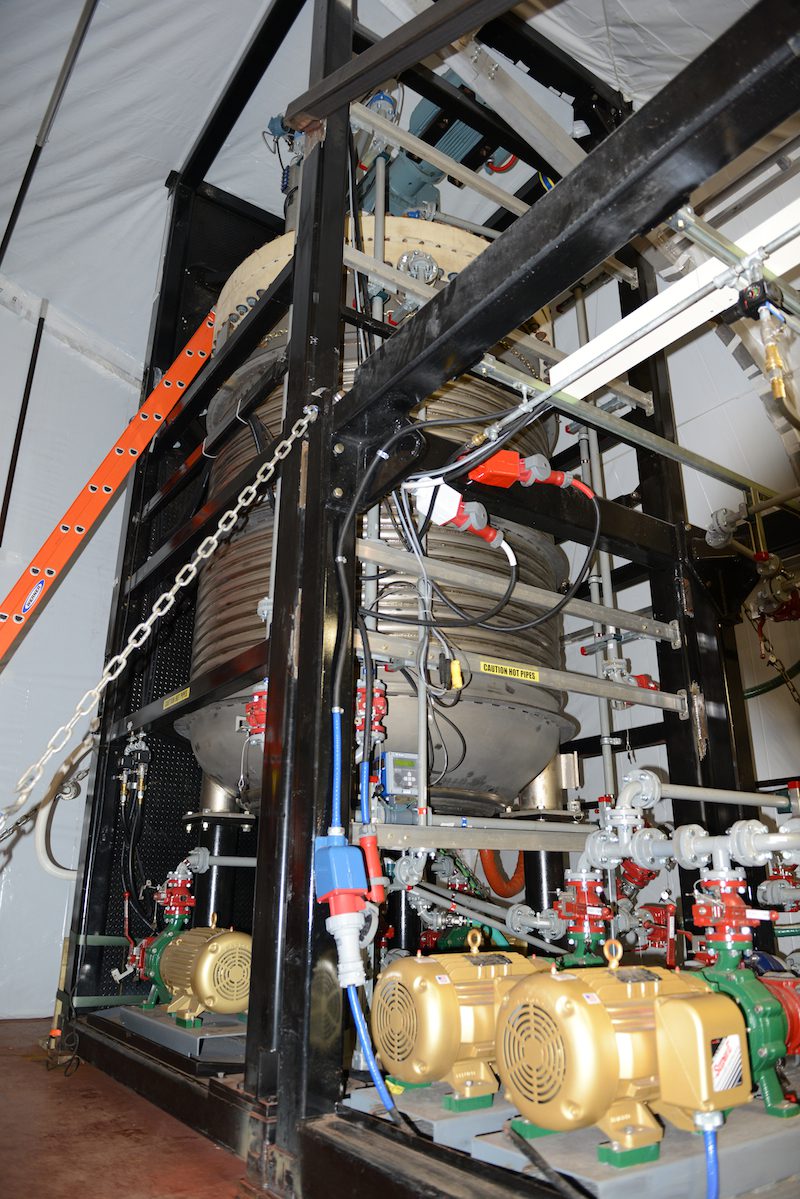 Each unit costs about $5 million and contains built-in redundancy and a titanium-lined reactor for mixing the chemical warfare agents with the chemicals that will neutralize them. All waste from the hydrolysis process on M/V Cape Ray, about 700 metric tons of material over the course of the mission, will be safely and properly disposed of at commercial facilities to be determined by the OPCW, with no hydrolysis byproducts released into the sea or air. The Cape Ray and its crew is also to comply with all applicable international laws, regulations, and treaties. Below: The two Field Deployable Hydrolysis Systems are housed inside two environmentally friendly tents set up below deck. Below: The ship is equipped with tanks that will be used to hold chemical reagents used to destroy the chemical weapons. The Assad regime in Syria is responsible for transporting the chemical materials safely to facilitate their removal for destruction, officials said.

“The international community is poised to meet the milestones set forth by the OPCW, including the June 30 target date for the total destruction of Syria’s chemical weapons materials, officials added. “The United States joins the OPCW and the United Nations in calling on the Assad regime to intensify its efforts to ensure its international obligations and commitment are met so these materials may be removed from Syria as quickly and safely as possible,” the statement concluded.

The M/V Cape Ray and its crew deployed Monday with a message of encouragement from Defense Secretary Chuck Hagel:

“As you all know, your task will not be easy,” Hagel said in a message to the Cape Ray crew. “Your days will be long and rigorous. But your hard work, preparation and dedication will make the difference.

“You are ready,” the secretary continued. “We all have complete confidence in each of you. You represent the best of our nation, not only because of your expertise and commitment, but because of your willingness to serve when called upon. For that, we will always be grateful. We are also grateful to your families for the love and support they have given you. On behalf of our country and the American people, I wish you much success. Take care of yourselves. God bless you all.”