As the world tracked the historic journey of Coast Guard Cutter Healy and the Russian-flagged tanker Renda through approximately 300 miles of ice-covered Arctic waters towards the small Alaskan town of Nome, some may ponder the unique capabilities of an ice breaking ship.

One reader commented on a recent blog post, “The engineering of ice breakers really interests me, as well as the methods used to break ice and escort ships.”

Daring to do what other ships ardently avoid, Healy is purposely designed to run into things – specifically, ice. While moving at three knots, Healy can continuously break 4 1/2 feet of ice. When encountering thicker ice, Healy can break up to 8 feet through a process called “backing and ramming,” repeatedly striking the ice in a controlled manner to break through a ridge.

While significant engineering goes into designing an icebreaker, breaking ice is based on two simple principles: (1) a sledgehammer is better than a butter knife and (2) two objects cannot occupy the same space at the same time. This photo from a 2009 science mission illustrates Healy’s rounded, blunted bow that enables it to ride up on top of the ice to break it. U.S. Coast Guard photo by Petty Officer 3rd Class Patrick Kelley.

Most seagoing vessels have a pointed bow designed to “cut” through the waves. For ice breaking, this is not the most efficient design.

Healy is designed with a rounded, blunted bow that enables it to ride up on top of the ice. As the bow raises up and the stern sinks below the water, the force of buoyancy acting on the submerged portion of the stern – think of putting a basketball underwater! – creates a lever-like action bringing Healy’s 16,000 tons down onto the ice and breaking it. Depending on the type of ice, the energy can radiate out from the ship, creating a swath of broken ice two or even three times the width of the vessel.

Once the ice is broken, the shape of Healy’s hull then facilitates turning the ice on its side to make room for the vessel where the ice used to be. This also creates an open area behind the Healy where the ice has been broken into smaller pieces that can be more easily moved aside by another ship – like the tanker vessel Renda. 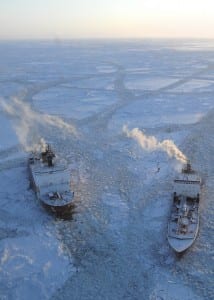 When conducting an escort, as with Renda, weather plays a critical role in the successful outcome of the operation.

Perpendicular winds create ice pressure along the sides of the vessels, increasing friction through the ice and filling in the open area created behind Healy quicker than the escorted vessel can sail into it. This process can result in requiring a higher risk, close-in escort to prevent the escorted vessel from becoming beset, or stuck, in the ice.

If Renda does become beset, Healy is able to free the vessel through a series of passes through the ice designed to relieve the pressure on its hull. Typically, Healy breaks a path parallel to Renda’s track to allow the ice pressing on Renda a place to go (principle two, again!). Sometimes the parallel path of both ships is enough to allow the beset vessel to back up into open water and regain momentum in the forward direction. But other times, many passes must take place to get the entrapped vessel moving again. The adage goes the fastest way between two points is a straight line. However, this is not always the case when ice breaking. Most often, the fastest way through the ice is to avoid it by following openings, called leads, in the ice.

To identify leads and areas of reduced ice coverage or thickness, ice pilots use a combination of satellite imagery, ice reports from the National Weather Service, Coast Guard aircraft over flights and, for this mission, a camera-equipped unmanned aerial vehicle. These technical sources of information are coupled with an ice pilots well-developed “seaman’s eye,” reading the contours of the ice to determine the best route. When technical information is not available, the navigator chooses the most direct route, avoiding ridges and following areas of thinner ice coverage.

From high tech satellite imagery to local knowledge and hands-on skill, navigating in ice is truly a combination of art and science.

This article was originally written by LT Connie Braesch for CG Compass.