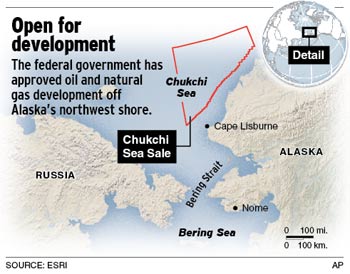 The Obama administration said Monday it was moving forward with oil-drilling leases off the coast of Alaska issued by the Bush administration in 2008, a victory for oil companies in the battle over Arctic Ocean drilling.

The Interior Department said it would uphold nearly 500 leases issued in the Chukchi Sea after several environmental groups challenged the sale of the leases in court.

Among the companies securing leases in what is known as Lease Sale 193 was Royal Dutch Shell PLC, the energy giant already at the center of another high-profile fight to secure permits to drill in the Arctic.

Environmental groups oppose the Chukchi Sea leases, contending U.S. regulators don’t know enough about the Arctic’s marine life and ecosystem to allow drilling in the region. The groups, invoking last year’s Deepwater Horizon oil spill in the Gulf of Mexico, also raise concerns about the ability of energy companies to respond to spills in the Arctic’s icy waters.

The Interior Department’s decision is the latest example of the Obama administration siding with energy companies against environmentalists amid a weak economy. Last month, President Barack Obama withdrew proposed ozone-emission rules that businesses said would have killed jobs.

“The Obama administration said it would make decisions in the Arctic based on sound science, but today it flunked the test,” said Erik Grafe, a lawyer at Earthjustice, a nonprofit environmental law firm.

The fate of Lease Sale 193 has been uncertain since 2010, when a federal court told the Interior Department to reconsider certain aspects of the sale. Among the issues the court asked the department to re-examine were the environmental impact of natural-gas development.

Environmental groups and Alaska native organizations had sued the Interior Department in 2008 to challenge the lease sale. In the 2008 lease sale, the Bush administration collected bids worth about $2.7 billion.

The Interior Department said Monday it had addressed issues raised by the environmental groups. It said those drilling in the area would be required to mitigate risks to wildlife and take precautions against spills.

The debate over Lease Sale 193 represents the latest skirmish in a broader battle over Arctic drilling. Last week, environmental groups sued to block Shell’s plans to explore in the Beaufort Sea, east of the Chukchi, saying the company hadn’t yet developed an adequate oil-response strategy.

Shell has faced similar challenges in its efforts to secure air-quality permits for drilling ships and a support fleet slated to begin work in the Arctic in the summer of 2012.

Alaskan lawmakers have generally backed oil production in the Arctic, saying it would help provide the U.S. a steady source of domestic oil. Earlier this year, state officials said they planned to offer nearly 15 million acres of state-owned land and waters for oil-drilling leases. Mr. Obama pledged in May to hold annual lease sales in Alaska’s National Petroleum Preserve.