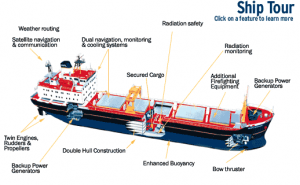 Pacific Grebe is owned by INS’s subsidiary, Pacific Nuclear Transport Ltd (PNTL). It is the last of three new UK-flagged vessels ordered by PNTL to fulfil its commitments to transport nuclear fuel and nuclear waste from Europe to Japan over the next two decades.

Alastair Brown, INS’s operations director, said: “The UK has a world-class expertise and 40-year heritage in the safe and secure transport of nuclear material. The arrival of Pacific Grebe represents the continuance of that heritage and the reinforcement of that expertise in Barrow-in-Furness, which will enable INS and PNTL to continue to fulfil their contracts with customers in Japan for the next two decades. And we’re especially pleased that the crew have managed to get home for Christmas.”

Pacific Grebe was preceded in 2008 by the Pacific Heron – which completed its second successful voyage to Japan last summer – and in September 2010 by the Pacific Egret. Both of these earlier vessels were designed specifically to carry mixed oxide fuel (MOX) to Japan. Pacific Grebe will carry high level waste.

“The new design incorporates all of the high standards of their predecessors, while using new technologies in the construction and installation of equipment and systems. They have significant efficiency improvements and meet the environmental requirements appropriate to vessels of this size, while setting new standards in nuclear maritime transport.”