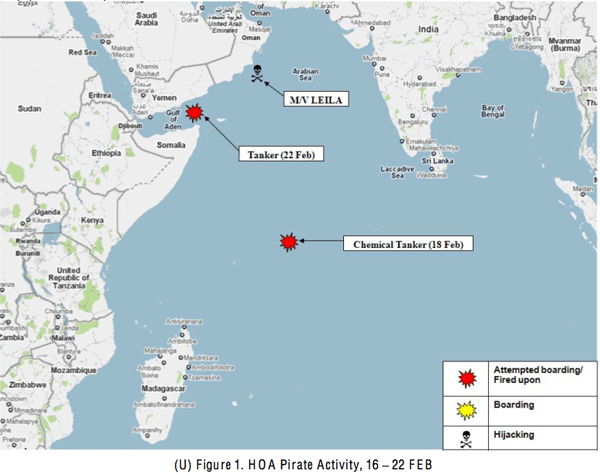 INDIAN OCEAN: Chemical tanker attacked on 18 February while underway near position 05:29 S – 064:02 E, approximately 500 nm east of the Seychelles. One skiff was noted approaching ship from 2 nm. As the skiff closed to a half nautical mile, it stopped and five to six pirates with RPGs and automatic weapons were seen by bridge crew. The onboard armed security team fired warning shots; pirates aboard the skiff returned fire with automatic weapons then moved away. (IMB)

ARABIAN SEA: Tanker attacked on 22 February while underway in position 13:30 N – 050:22 E, in the Arabian Sea. One skiff sighted approaching the ship from 1.6 nm from starboard bow.  The onboard armed security team came to the bridge and identified weapons in the skiff and fired one warning shot. The pirates then fired upon the tanker with AK-47s. An exchange of fire took place with the security team. Master took evasive maneuvers, sent a distress message, contacted relevant authorities, and mustered non-bridge crew personnel in a safe room. A nearby warship dispatched a helicopter to the location. The pirates aborted the attempted attack after firing 50-60 rounds and moved away. (IMB)

Here is the list of vessels still in pirate control… B. SOMALI COAST: Northeast monsoonal flow off the Somali coast continues to produce moderate to severe impacts in the area.  Expect northeasterly winds 15 – 20 knots and seas of 6 – 8 feet that will decrease to 4 – 6 feet by 26 Feb.  EXTENDED FORECAST: Winds will maintain northeasterly speed of 15 – 20 knots, and seas of 3 – 5 feet will increase to 5 – 7 feet by 29 Feb.

D.  CENTRAL AFRICAN COAST/INDIAN OCEAN: Residual swell waves from the southern Somali Basin region continue to impact area but overall conditions will remain moderate, with northeasterly winds 13 – 18 knots and seas of 3 – 5 feet.  EXTENDED FORECAST: Small boat operations off the Tanzanian and Kenyan coast will have marginal impacts as northeasterly winds will maintain 13 – 18 knots and seas will be 3 – 5 feet.

F. SURFACE CURRENTS: Currents within the Somalia Basin, Gulf of Aden, and into the Indian Ocean remain variable with most areas having average speeds of less than 1.5 knots.  An area of increased current speeds exists along the Somali coast, continuing south off the northern Kenya coastline until about 5 degrees South. This northeast to southwest current is moving along the coastline at speeds up to 3 knots. The Mozambique Channel has an average current of 1 – 2 knots.