The following is the summary of maritime crime and piracy for the week of 12 January 2012.  (Source: ONI)

PERU: Bulk carrier boarded on 13 January while at anchor at position 12:07.7S – 077:12:3W, Callao Anchorage Area No.12, Peru.  Six robbers armed with long knives attempted to board an anchored bulk carrier via the anchor chain. Alert crew noticed the robbers, raised  alarm, and crew mustered. Upon hearing the alarm, the robbers aborted the attempted boarding and escaped. Port authorities informed and Coast Guard officials went to ship for the investigation. (IMB)

INDIAN OCEAN: Tanker attacked by six pirates on 16 January while underway at position 15:04N – 058:17E, approximately 265 nm northeast of Socotra Island, Yemen. Lookouts onboard the tanker first noticed the pirates approaching their vessel in a skiff at a distance of 3.5 nm. At a distance of 300 meters, the onboard unarmed security team engaged the skiff with the Long Range Acoustic Device (LRAD) while ship’s personnel not on the security team or bridge watch team mustered in the citadel. The skiff fired at the vessel and continued to approach. The security team fired warning flares, which landed close to the skiff. The pirates continued to approach and fire upon the vessel. After the security team fired two more flares close to the skiff, the pirates aborted but followed the vessel for another 15 minutes before heading toward a mothership noted in the vicinity. (IMB)

INDIAN OCEAN: Spanish Naval Ship fired upon by seven pirates in a single skiff during attempted boarding on 12 January in position 001:37N – 046:00E, approximately 47 nm southeast of Mogadishu.  Pirates were approaching from the stern and attempting to board using a ladder when ship’s personnel returned fire, prompting the pirates to abort attack and attempt to depart the area. (Operator)

INDONESIA: Container ship experienced an attempted boarding on 14 January while anchored at position 01:24:28N – 104:42:09E, approximately 12 nm northeast of Binta Island, Indonesia.  Four robbers wearing masks and armed with knives approached ship in a small boat.  Two of the robbers attempted to board the ship by climbing the anchor chain. Duty crew noticed the robbers and informed bridge who raised the alarm. Crew mustered and activated the fire hoses, resulting in the robbers aborting the attempted boarding. (IMB)

INDONESIA: Bulk carrier boarded by five robbers on 13 January while at anchor at position 01:41S – 116:38E, Adang Bay Anchorage, Indonesia.  Robbers boarded via the forecastle while crew was busy tending to cargo operations. When duty crewman returned to forecastle, he saw two robbers who pushed him and escaped in a waiting boat. Upon investigation, it was noticed that the forward store room had been broken into and ships stores stolen. (IMB)

B. SOMALI COAST:  NE monsoonal flow off the Somali coast continues to produce moderate to severe impacts in the area.  Expect winds NE 20 – 25 G 35 and seas 5 – 7 feet through the next 72 hours.  EXTENDED FORECAST: Winds and seas will remain NE 20 – 25 and 5 – 7 feet through the forecast period, with an increase of seas (7 – 9 feet) along the southern Somali coast by 22 JAN.

D. CENTRAL AFRICAN COAST/INDIAN OCEAN: Residual swell waves from the southern Somali Basin region continue to impact area, but overall conditions will remain moderate, with winds NNE 10 – 15 and seas 3 – 5 feet through the next 72 hours.  EXTENDED FORECAST Small boat operations off the Tanzania and Kenyan coasts will be impacted as winds and seas increase to N 15 – 20 and 7 – 9 feet by 22 JAN.

E. MOZAMBIQUE CHANNEL: A developing storm system over the channel will impact small boat operations significantly over the next 72 hours. Expect winds N 25 – 30 G 35 and seas 7 – 9 feet in the Mozambique Channel.  EXTENDED FORECAST The storm system will continue to develop, lingering over the channel through the forecast period, significantly impacting small boat operations.  Winds will increase (35 – 40 G 45) by 22 JAN, with seas increasing (9 – 12 feet) after 20 JAN, with seas reaching (12 – 15 feet and greater) in the southern portion of the channel.  Winds and seas will slowly decrease to N 25 – 30 G 35 and 7 – 9 feet by the end of the forecast period.

F.  SURFACE CURRENTS: Currents within the Somalia Basin, Gulf of Aden, and into the Indian Ocean remain variable, with most areas having average speeds of less than 1.5 knots.  An area of increased current speeds exists along the Somali coast, continuing south off the northern Kenya coastline until about 5ËšS. This NE to SW current is moving along the coastline at speeds up to 3 knots. 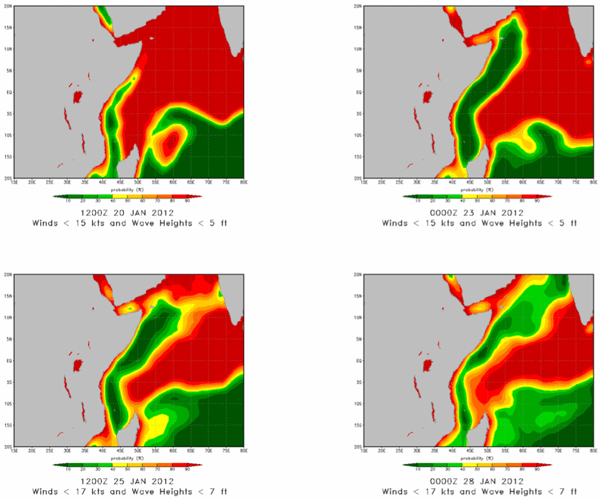 Join the 69,509 members that receive our newsletter.