An update from Pemex said the fire was extinguished at about 10:45 a.m. By Amy Stillman (Bloomberg) — A fire has broken out near Pemex’s Ku Maloob Zaap offshore platform complex... Covid-Stricken Pemex Is No Longer Testing All Platform Workers

By Amy Stillman (Bloomberg) –Petroleos Mexicanos, which has one of the world’s highest employee death tolls from Covid-19, is no longer distributing rapid tests for the virus to workers before...

By Amy Stillman (Bloomberg) — Of all the companies around the world affected by Covid-19, none has disclosed a worse death toll than Pemex, Mexico’s state-owned oil producer. Petroleos Mexicanos,... By Amy Stillman and Peter Millard (Bloomberg) –Mexico’s state oil giant is suspending contracts with service providers and suppliers, triggering thousands of job losses, people with direct knowledge of the...

By Amy Stillman (Bloomberg) –When 62-year-old Tomas Morales registered a fever of 101.3 Fahrenheit on April 14, the doctor told him to self-isolate. But there was a problem: Morales was... By Gabriel Stargardter PARAISO, Mexico, June 28 (Reuters) – Until recently, Edgar Barrera enjoyed a life many Mexicans could only hope for. In a few short years, the 36-year-old bookkeeper rose... PHOTOS: Largest Wreck Removal of 2016 Completed in Gulf of Mexico

A little more than a year after salvors from Titan and Svitzer joined forces, the combined company Ardent says it has completely the salvage industries’ largest wreck removal of 2016... Some amazing video has surfaced showing yesterday’s fire fighting effort to extinguish a massive fire aboard a laden PEMEX oil tanker in the Gulf of Mexico. The fire broke out... MEXICO CITY, Sept 24 (Reuters) – A fire broke out on an oil tanker of Mexican state oil company Pemex in the Gulf of Mexico on Saturday, forcing all the...

by Adam Williams (Bloomberg) Exxon Mobil Corp., Chevron Corp. and Hess Corp. have agreed to bid together for rights to drill for crude in Mexico’s deepwater oil areas, according to a person with... Semi-submersible accommodation vessel owner Prosafe is laying up two more rigs due to cuts by Mexican oil company Pemex, meaning that all five of Prosafe’s rigs working off Mexico will... By Adam Williams (Bloomberg) — Mexico’s state-owned oil company is taking deepwater development off its plate for now. Driven to rip $5.5 billion out of its budget this year to... By Adam Williams (Bloomberg) — While more than 180,000 onshore wells are producing oil in Texas, only 8,250 have been drilled by Petroleos Mexicanos across the border in Mexico. Welcome... Mexico's state-run oil company, Pemex, confirmed on Monday there was an accident on an oil platform at one of its major operations in the southern Gulf of Mexico, but added any impact on output remained unclear. Mexican oil company Pemex said an accident on Tuesday has left an offshore maintenance rig in the southern Bay of Campeche listing, killing two workers, but has not affected crude production. 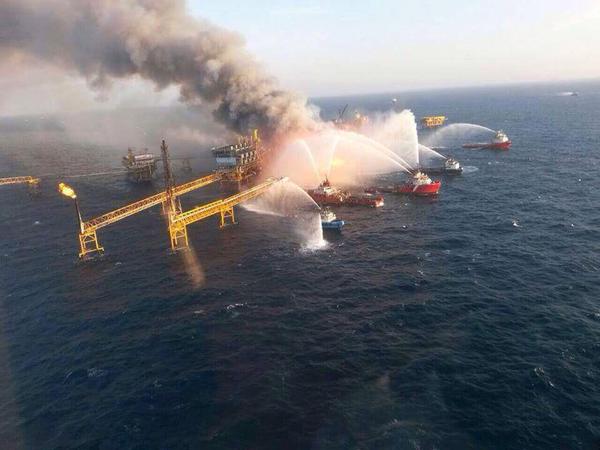 Fire Out at Pemex Processing Platform

The fire at Pemex's Abkatun A- Permanente processing platform in the Bay of Campeche has been extinguished as the company begins to assess the damage.

Join the 71,254 members that receive our newsletter.