(NASA)–In 2021, NASA’s fleet of Earth-observing satellites, as well as the instruments and astronauts on the International Space Station, captured some compelling moments on our planet.

From record-breaking heatwaves to pandemic-related events, the images in this list showcase some of the beautiful and complex events that occurred on our planet in the past year. They also demonstrate how NASA’s Earth-observing technologies and missions provide valuable information to scientists, government agencies, and people around the world.

Here are some of our favorite satellite images from 2021:

Booming demand for consumer goods, labor shortages, bad weather, and an array of COVID-related supply chain snarls contributed to backlogs of cargo ships at ports around the world in 2021. On Oct. 10, the Operational Land Imager (OLI) on Landsat 8 captured this natural-color image of dozens of cargo ships waiting offshore for their turn to unload goods near the ports of Los Angeles and Long Beach in Southern California, the two busiest container ports in the United States.  Shipping traffic jams were not limited to Los Angeles, or even to the United States. Ports in Malaysia, Singapore, Hong Kong, and Shanghai all had queues of container ships waiting offshore at various points throughout the year, according to news sources.

Tidal Vortices in the Sea of Okhotsk

Some of the highest diurnal tides in the world—nearly 14 meters (46 feet)—have been recorded in the Sea of Okhotsk. In the Russian Far East, narrow bays funnel and amplify the incoming tides, making it a prime location for tidal power generation.

The transition from smooth, laminar flow to mixed, turbulent flow is visible in this natural-color image of the western Sea of Okhotsk. The image of the Shantar Islands and Uda Bay was acquired on Sept. 24, 2021, by the Operational Land Imager (OLI) on Landsat 8.

The currents around the Shantar Islands are heavily influenced by the strong tides and by freshwater discharge from rivers draining into Uda Bay. The waters here are frozen for much of the year. When the sea ice melts and freshwater snowmelt swells the Uda River, plumes of low-salinity water can reach far offshore.

As the strong tides and currents flow through straits in the Shantar Islands, they encounter rocky outcrops, headlands, capes, and small islands that disrupt the laminar flow. This can create chains of spiral eddies that rotate in alternate directions as they form. These chains are known as vortex streets or von Kármán vortices. The physical processes that create the vortices were first described in 1912 by Theodore von Kármán, a Hungarian-American physicist and a co-founder of NASA’s Jet Propulsion Laboratory.

An astronaut onboard the International Space Station (ISS) snapped this photograph of a portion of the Paraná River, the second longest river in South America. It flows mostly northeast to southwest for 3,030 miles (4,880 kilometers), passing through Brazil, Paraguay, and Argentina and making part of the Argentina–Paraguay border.

This image captures some of the interlocking, braided patterns that are common along the Paraná River system. Sediment that eroded upstream from riverbanks in Brazil was carried downriver and deposited and piled up into islands—such as Isla Apipé (Argentina). The sediments also make braid bars, which are smaller, rhomboid-shaped landforms created by the interweaving of water and land as the river level rises and falls over time.

This labyrinth of braided channels also provides routes for small boats and ships, allowing for the transport of goods to inland South America—at least as far upstream as the Yacyretá Dam. Built to generate hydroelectric power, the dam now separates the upper Paraná River from the braid bars.

Farmers cultivate crops such as coffee, corn, and cotton in fields adjacent to the Paraná River floodplain. These crops, among others, have been affected by ongoing drought conditions that began in the region in 2020 and slowed the transport of goods due to decreased water levels.

Much like the sky, rivers are rarely painted one color. Rivers around the world appear in shades of yellow, green, blue, and brown—and subtle changes in the environment can alter their colors.

New research shows the dominant color has changed in about one-third of large rivers in the continental United States over the past 35 years.

The figure above shows data from a map of river color for the contiguous United States. The rivers are colored as they would approximately appear to the human eye. The map was built from 234,727 images collected by Landsat satellites between 1984 and 2018. The dataset includes 67,000 miles (100,000 kilometers) of waterways of at least 200 feet (60 meters) wide.

While is not unusual for rivers to change colors over time due to fluctuations in flow, concentrations of sediments, and the amount of dissolved organic matter or algae in the water, scientists have found that the most extreme changes often occur near man-made reservoirs. Around 56 percent of rivers were dominantly yellow over the course of the investigation, and 38 percent were dominantly green.

This year, NASA and the U.S. Geological Survey provided the public with a powerful new camera to observe our changing planet.

This natural-color image—which shows the Coronation Islands along the Kimberly coast of Western Australia—was one of the first to be taken by the new Landsat 9 satellite on Oct. 31, 2021, about a month after launching from Vandenberg Space Force Base in California.

Building on an unparalleled record of Landsat missions that span nearly 50 years, Landsat 9 is a joint mission between NASA and USGS. The new satellite and instruments are quite similar in design to Landsat 8, which was launched in 2013 and remains in orbit. Together, the two satellites will collect approximately 1,500 images of Earth’s surface every day, observing the entire planet every eight days.

The data from Landsat 9 will be available to the public for free from the USGS website once the satellite begins normal operations in 2022. 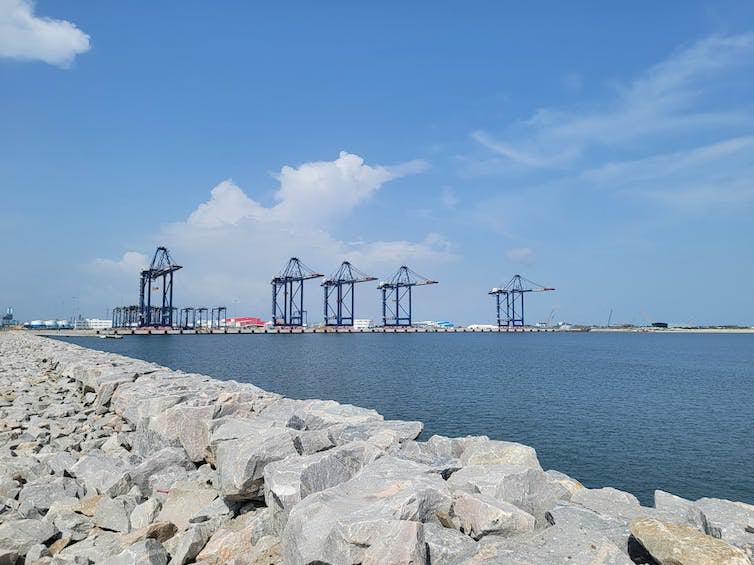 by Ayodeji Olukoju (University of Lagos) Three-quarters of the world is covered by water and up to 90% of world trade is seaborne. Seaports and shipping are critical to the... This website uses cookies to improve your experience while you navigate through the website. Out of these, the cookies that are categorized as necessary are stored on your browser as they are essential for the working of basic functionalities of the website. We also use third-party cookies that help us analyze and understand how you use this website. These cookies will be stored in your browser only with your consent. You also have the option to opt-out of these cookies. But opting out of some of these cookies may affect your browsing experience.
Necessary Always Enabled
Necessary cookies are absolutely essential for the website to function properly. This category only includes cookies that ensures basic functionalities and security features of the website. These cookies do not store any personal information.
Non-necessary
Any cookies that may not be particularly necessary for the website to function and is used specifically to collect user personal data via analytics, ads, other embedded contents are termed as non-necessary cookies. It is mandatory to procure user consent prior to running these cookies on your website.
SAVE & ACCEPT
{"Tags":["imagery","nasa","satellite"],"Categories":["Photo"],"Excerpt":"(NASA)–In 2021, NASA\u2019s fleet of Earth-observing satellites, as well as the instruments and astronauts on the International Space Station, captured some compelling moments on our planet.   From record-breaking heatwaves to pandemic-related events, the images in this list showcase some of the beautiful and complex events that occurred on our planet in..."}