(Note: This article was originally written and submitted to gCaptain prior to the Felicity Ace fire, the cause of which is not yet known. It has been updated to include commentary on this event and the emerging Grimaldi/Euroferry fire off Corfu in the Mediterranean.)

Fire onboard a ship can be catastrophic. Many types of fires have standard firefighting procedures, but innovative installations onboard or different cargoes lead to new risks. One of those emerging risks is in the carriage of electric vehicles (EV) onboard roll-on/roll-off (ro-ro) vessels in particular.

As far back as 2013, the German Federal Ministry of Transport, Building and Urban Development had commissioned a study to determine if the carriage of electric vehicles on ro-pax or ro-ro vessels increased the risk of fire onboard.  The conclusion was that the carriage of electrically powered vehicles (BEV and HEV) results in an increased risk of fire. The study additionally addressed fire protection and firefighting procedures including a discussion of additional firefighting measures onboard ro-pax and ro-ro vessels.

“In the event of a lithium ion battery catching fire, it is important to note that such a fire reaches very high temperatures, produces toxic gases and is inextinguishable.”

The recommendations from the German BMVBS included :

In 2016, DNV-GL released a report addressing fires on ro-ro cargo decks.  It was not focused on electric vehicles and addressed all factors regarding ro-ro cargo fires in eighteen incidents. The recommendations included :

DNV-GL’s identification of “shift of cargo represents a risk” is particularly pertinent to the carriage of electric vehicles.  The diagram below from the Journal of The Electrochemical Society looks at four conditions that can lead to lithium ion battery (LIB) thermal runaway – one of which is mechanical abuse.  In other words, simply having lashings fail in a seaway with a cargo of EV shifting could lead to a thermal runaway and ensuing fire.

As EV become more common, they are increasingly being carried by ocean transportation. While not specifically implicated in a number of recent ro-ro fires, the hazards of batteries in general have been identified by the U.S. Coast Guard in Marine Safety Alert 06-20 Recognizing Fire Hazards & Proper Cargo Stowage on RO-RO Vessels and various protection and indemnity organizations including the Britannia and UK P&I clubs.

The source of the USCG MSA and the P&I club articles are mainly accident reports from fires that have occurred.  Much like the DNV-GL report of 2016, recent accident reports are used to gain insights as to how similar incidents might be prevented.  Unfortunately, access to these reports is not a guarantee as it is at the discretion of the flag state investigating.  As noted in the main picture above, the accident report for Sincerity Ace was submitted to IMO a year ago, yet is not publicly available from the flag state – Panama.  It has been surmised that this ro-ro cargo fire – along with five fatalities – might be EV-related.

Other information on how EV and LIB fires might be fought can be found by going outside the maritime industry.  The National Fire Protection Association (NFPA) has produced an Electric Vehicle Emergency Field Guide that addresses EV emergency response for first responders ashore. Unfortunately, many of the procedures and recommendations might not be applicable at sea due to stowage and space.

There is continued interest in EV and LIB fires in transportation. The U.S. Transportation Research Board has funded a study for 2022 noting, “Lithium-ion battery fire risks are currently undermanaged in transit operations.”  More immediately, the Ship Operations Cooperative Program (SOCP) hosted a presentation by Captain Jim Staples of Ocean River LLC, “Understanding the Risk when Carrying Electric Vehicles on a Vessel,” on February 17th. 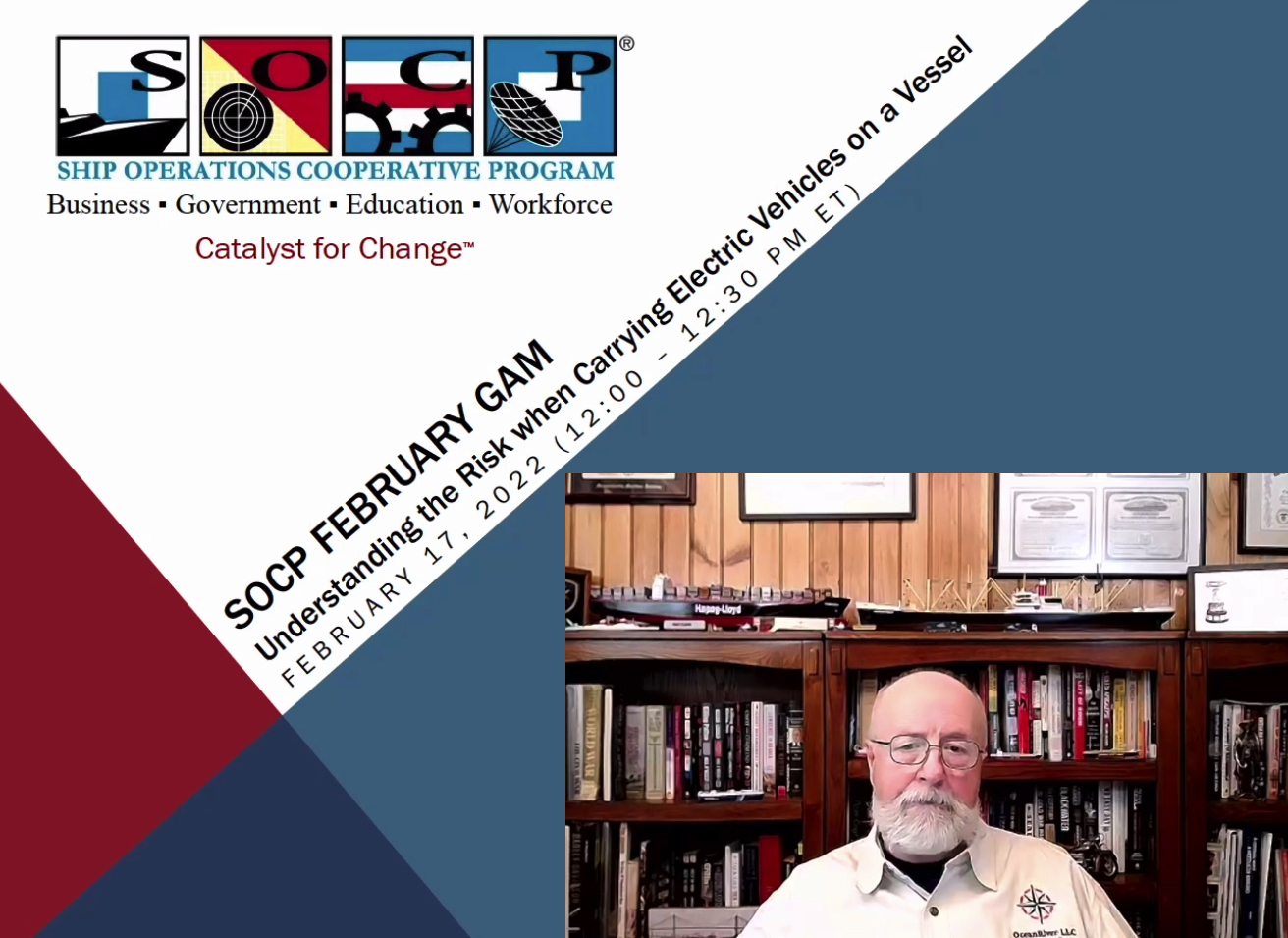 Some of the takeaways from Captain Staples’ presentation include :

Captain Staples also called for the release of the accident report from Sincerity Ace, opining that the incident might have been related to an EV fire. Meanwhile, Felicity Ace continues to burn in the Atlantic Ocean to the Southwest of the Azores. The Portugese Navy is standing by after rescuing the crew of Felicity Ace and salvors are said to be enroute. If salvors are able to contain the fire and bring the vessel to port, we can hope there are lessons learned that will be made public.

Another ongoing ro-ro fire is on a Grimaldi/Euroferry vessel operating between the Greek port of Igoumenitsa to Brindisi, in eastern Italy. Catching fire at 9:30 PM (EST) on 17 February, one crewmember has been sent ashore with injuries, two persons are reported trapped on the car deck, with all other passengers and crew reported as safe. Initial word is that the fire started on the cargo decks and the video below shows extensive damage to trucks stowed on the upper decks.

Grimaldi is no stranger to fires onboard ro-ros with Grande Europa having a fire onboard in the Mediterranean in 2019 and Grande America burning and then sinking in the Bay of Biscay in 2020. After these two events, Grimaldi stated, “…with reference to rolling freight, the Grimaldi Group requests that there be more controls on car batteries, which often cause short-circuits on board vessels, as well as in port terminals.”

Let’s be safe out there!

Join the 88,118 members that receive our newsletter.

This website uses cookies to improve your experience while you navigate through the website. Out of these, the cookies that are categorized as necessary are stored on your browser as they are essential for the working of basic functionalities of the website. We also use third-party cookies that help us analyze and understand how you use this website. These cookies will be stored in your browser only with your consent. You also have the option to opt-out of these cookies. But opting out of some of these cookies may affect your browsing experience.
Necessary Always Enabled
Necessary cookies are absolutely essential for the website to function properly. This category only includes cookies that ensures basic functionalities and security features of the website. These cookies do not store any personal information.
Non-necessary
Any cookies that may not be particularly necessary for the website to function and is used specifically to collect user personal data via analytics, ads, other embedded contents are termed as non-necessary cookies. It is mandatory to procure user consent prior to running these cookies on your website.
SAVE & ACCEPT
{"Tags":["battery power","car carriers","Fire Incidents"],"Categories":["Accidents"],"Excerpt":"(Note: This article was originally written and submitted to gCaptain prior to the Felicity Ace fire, the cause of which is not yet known. It has been updated to include..."}