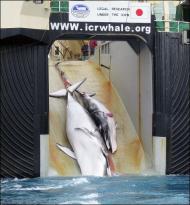 Australia has released graphic pictures of minke whales caught by a Japanese hunt in the Antarctic.

Canberra claimed the pictures, taken by customs officers tracking the hunt, show a harpooned mother and calf being dragged from the sea.

Japan denied that claim and called the pictures “emotional propaganda”.

Mr Garrett said they contradicted Japan’s long-standing claim that the hunt was legal and for scientific research purposes.

“It is explicitly clear from these images that this is indiscriminate killing of whales, where you have a whale and its calf killed in this way,” he said.

“And to claim that this is in any way scientific is to continue the charade that has surrounded this issue from day one.” Continue Reading…