Royal Caribbean’s Anthem of the Seas is expected to return to Cape Liberty, New Jersey on Monday with major interior damage after the cruise ship was caught in an ‘extreme’ hurricane force storm off the U.S. east coast.

The 4,180 passenger cruise ship departed New York for Port Canaveral, Florida on Saturday and sailed directly into the path of rapidly deepening storm low off the Carolinas, which as of Saturday afternoon was forecasted to produce winds of 65 knots and seas to 11.5 meters (about 38 feet) by noon Sunday. By 02 UTC Sunday morning, the storm was already at hurricane force with max sustained winds of 65 knots as it made its way up the Gulf Stream. 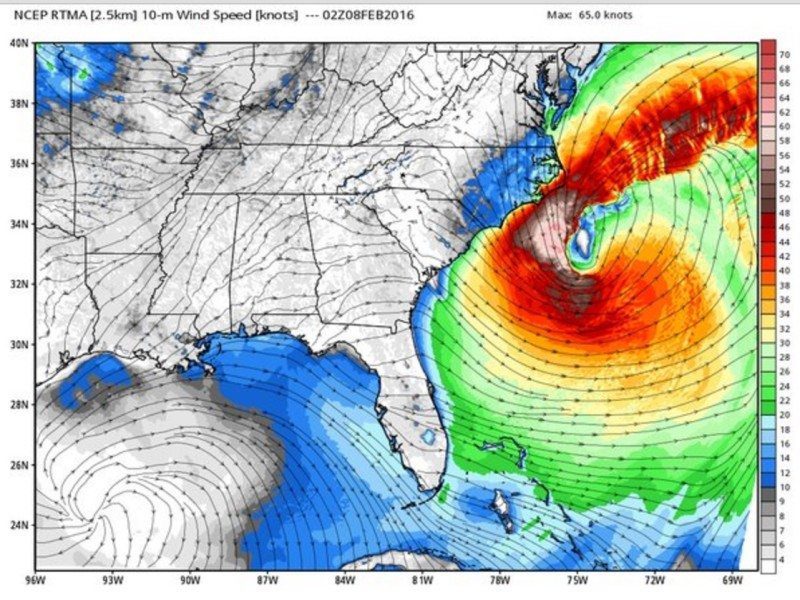 A statement from Royal Caribbean on Monday said the Captain locked down the ship after experiencing “extreme wind and sea conditions, with wind speeds higher than what was forecasted.”

“In an abundance of caution, the captain asked all guests to stay in their stateroom until the weather improved. At this time there have not been any serious injuries reported. The ship has sustained some damage to the public areas and guest staterooms, which in no way affect the sea-worthiness of the ship,” the statement from Royal Caribbean said.

An update Monday from the company said the ship is carrying about 4,500 guests and 1,600 crew on what was supposed to be a 7-night cruise departing on Saturday.

While riding out the storm, some passengers took to social media to post about it:

On Cruise Critic forums, one passenger described the ordeal in a post on Sunday night (the post below is unverified):

We are on the Anthem right now, left NY yesterday, we sailed in a storm that intensified very quickly, Captain tried to turn ship but waited too long. We have been stuck in 125+ mph winds 30+ foot waves for 4 hours. Captain said they are in communication with the coast guard, struggling to point ship into wind but can’t move forward. All passengers told to stay in cabins water entered ship on upper decks, large white structure broke off top of ship landed in pool. At the height of storm waves breaking above the top of life boats and ship listing almost 45 degrees, with wind looked like a total white out. Conditions are improving but damage all over ship, crew look concerned and sounded very concerned on intracom. Some passengers sitting in muster stations.

The Coast Guard says it did not receive a distress call from the Anthem of the Seas but contacted the ship after seeing posts on Twitter and social media.

“The ship said that everything was fine, and no distress calls have been issued. The ship was caught in the storm off the shore of Charleston. There are 40 plus knot winds and large swells. The USCG will continue to monitor the situation,” the U.S. Coast Guard said.

The National Weather Services’ Ocean Prediction Center took to Facebook on Monday to update what was observed: With news of the ship spreading quickly online, Royal Caribbean has now under fire over its decision to continue the voyage sailing almost directly into the path of a well-forecasted hurricane force storm.

“Looking back at the NOAA OPC forecast charts – they predicted as early as Feb 3rd storm force conditions off Cape Hatteras by the 8th. By the 6th they were warning of hurricane force conditions were likely so this was no surprise,” Fred added.

The Anthem of the Seas is expected to arrive back in New York harbor on Monday afternoon with only a few minor injuries reported, but some major cosmetic damage.

Anthem Of The Seas was battered with 150+ MPH winds, and 30+ foot waves. The ship was on its way from Cape Liberty to Port Canaveral where it encountered this long storm. Passengers were told to stay in their cabins, and this photo is a picture of some of the aftermath. #AnthemOfTheSeas #RoyalWOW #RoyalCaribbean #RoyalCaribbeanInternational #WinterStormMars •••• (?: @flatgreg on Twitter) A photo posted by Cruise Ships (@cruise.crazy) on Feb 8, 2016 at 4:27am PST

scariest time of my life. #anthemoftheseas #dancemoms A photo posted by taylor? (@aldccartwheel) on Feb 8, 2016 at 7:53am PST