The American Salvage Association hosted their Annual General Meeting (AGM) this past November 28th at the New Orleans Marriott Hotel. With almost 100 members and guests in attendance, the AGM was the ASA’s most successful meeting to date. The AGM kickstarted the New Orleans Annual Work Boat Show with attendees from around the world and a large representation of the ASA’s versatile membership from North, Central, and South America, as well as the Caribbean.

“Interest in the activities and work of the American Salvage Association has grown significantly since the mission of the ASA was expanded to include the entire Western Hemisphere,” said ASA Executive Director Dick Fredricks.  “Proof of this can be seen in the increase in attendance at the ASA’s annual meetings – more than double the number of government and industry attendees in just two years.”

The ASAs largest networking meeting consisted of panels featuring regulators and industry discussing the hottest salvage topics to date, such as the record breaking hurricane season and how industry and regulators came together to respond. Regulators were extremely impressed by the ASA members’ response to these hurricanes. RADM Paul Thomas and Captain Joe Loring of the US Coast Guard praised the salvage industry for its historic response to hurricanes in Texas, Florida and the Caribbean territories, quickly opening critical ports and waterways while minimizing environmental impacts.

Captain Loring also noted that the salvage industry had successfully passed every verification audit since the Coast Guard began reviewing salvage and marine firefighting service providers in 2010. The future challenges for the salvage industry were also discussed in a panel highlighting LNG Salvage and Large Ship Salvage which are at the forefront of the ASA members’, and the entire maritime industry’s, concerns. The ASA’s working committees highlighted their past year from the ASA’s conjointly held Science Fair with partner and member NAMEPA, to newly formed committees such as the Salvage Diving Committee and Latin American Committee. The organization also highlighted the launch of its redesigned digital magazine SOUNDINGS that launched on the day of the meeting. The quarterly digital magazine reaches over 130,000 maritime professionals and has become the go to source for updates on Salvage, Wreck Removal and Emergency Response. 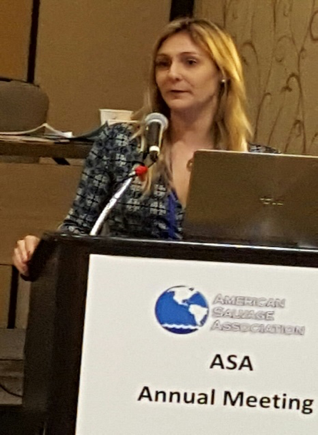 The ASA’s Bi-Annual elections were held at this year’s meeting where general members voted for a newly constituted Executive Committee and Leadership Committee. The 2017 election resulted in Lindsay Malen – Habib, of Resolve Marine Group as the new Secretary Treasurer, and, the first female ever on the ASA’s Leadership Committee. “It has been a privilege to be part of the ASA during my career in salvage, and now as part of the leadership committee I vow to dedicate myself to the ASA’s growth, while managing to keep our costs down and continuing to increase our exposure on a global level,” said Malen-Habib.

David DeVilbiss, Global Diving and Salvage, was made Vice President of the ASA where he will support the organization’s goals and the new organization’s new President, Jim Elliott. “I look forward to working closely with the salvage industry and stakeholders in supporting the mission of the ASA. The recent increase in association membership and various responses throughout the Americas has highlighted the true depth of services offered by our members. Whether it be protecting assets at sea, keeping navigable waterways open, or protecting the environment from pollution, our organizations’ members have much to offer,” stated DeVilbiss. “Through my term as Vice President, it will be an honor to bring to light the real value and capability of the membership and help increase awareness of the salvage industry’s role as partners in response.”

The new President, Jim Elliott of T&T Salvage, said: “As the new President of the American Salvage Association, it is a great honor to represent the men and women of the marine salvage industry. In the past few months, the salvage industry has demonstrated its incredible capacity, capabilities and resilience, simultaneously salvaging hundreds of ships, barges and boats in multiple locations following three hurricane landfalls, all while continuing to effectively meet the US regulatory standards for salvage and marine firefighting.”

The American Salvage Association will hold it’s next meeting in conjunction with the Work Boat show in November of 2018.

About the American Salvage Association

‘A Symphony’ Cargo Removed in China

SINGAPORE, May 5 (Reuters) – Cargo onboard a tanker that leaked oil off China has been removed and preparations are underway so the vessel can sail to a Chinese repair...