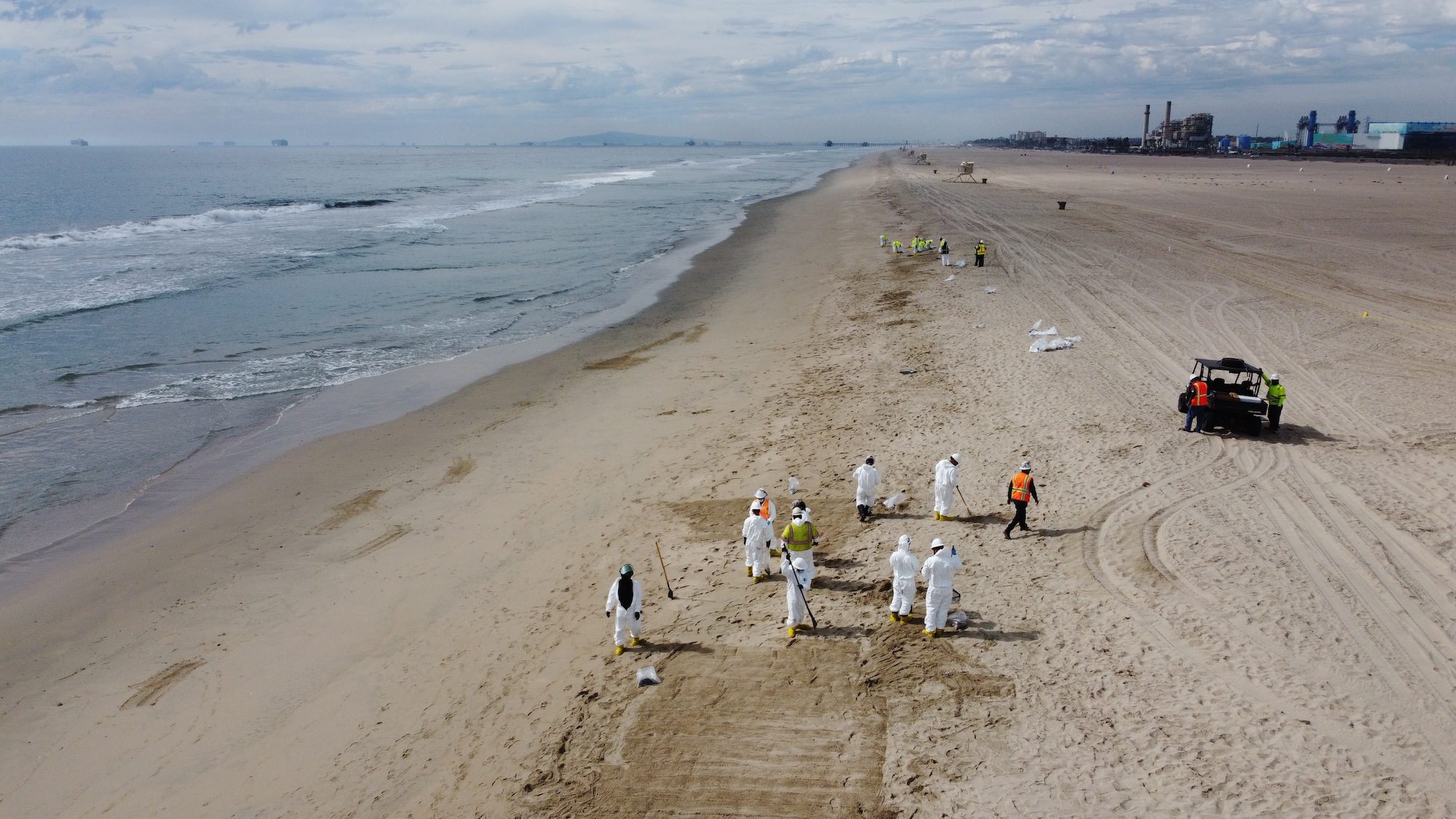 Shoreline crews conduct cleanup operations on Huntington Beach, Calif., Oct. 4, 2021. In the top left, you can see ships anchored off the coast as they await to enter the San Pedro Bay Port Complex, home to the ports of Los Angeles and Long Beach. Credit: Southern California Spill Response

New details about the pipeline could be the smoking gun in the investigation into the cause of Southern California’s oil spill.

Officials responding to the oil spill off the coast of Orange County, California said Tuesday that a long stretch of the pipeline being investigated as the source of the spill had been displaced laterally on the seafloor and had a 13-inch split, further pointing to a dragging anchor as being the cause of the leak even though officials are yet to confirm these details.

The Unified Command, consisting of the Coast Guard, California Department of Fish and Wildlife’s Office of Spill Prevention and Response (CDFW-OSPR), and Amplify Energy, have contracted commercial divers to identify the source of the leak.

“The divers on Monday validated Remotely Operated Vehicle footage showing no indications of oil release at the potential source of the leak,” the command said in an update issued Tuesday, which added:

“Diver reports and ROV footage show that a 4,000-foot section of the 17.7 mile-long pipeline was displaced with a maximum lateral movement of approximately 105 feet and had a 13-inch split, running parallel to the pipe.”

The pipeline in question is a 16-inch diameter oil pipeline belonging to Amplify Energy which runs from the offshore platform Elly, a processing platform for both production platforms Ellen and Eureka, to a pump station located onshore at the Port of Long Beach and an onshore tankage and metering facility, according to Amplify’s website.

While the update did not confirm or even address that a ship’s anchor may have caused the 105-foot lateral movement of the pipe (the update actually says “the cause of the spill remains under investigation“), evidence certainly suggests that it was and would confirm statements from the Coast Guard and Amplify Energy officials from Monday that investigators were looking into an anchor as being the cause.

In a Tuesday afternoon press conference, the Unified Command (including the Coast Guard) confirmed these new details but when asked about a ship’s anchor, did not say what actually caused the pipeline to be displaced.

“I’m not here to speculate about the cause. There will be a full investigation,” said Martyn Willsher, CEO at Amplify Energy. “Obviously the pipeline has been displaced. It’s a 16-inch steel pipeline that’s a half inch thick and covered in an inch of concrete. For it to be moved 105 feet is not common.”

The Unified Command is also addressing reports that perhaps the oil spill began as early as Friday evening.

“The National Response Center received a report of a unknown sheen of unknown source on Friday evening. These types of reports are common and in many cases, the sheen reported can be natural seepage of oil or sheen that is never located. NOAA satellite imagery was reported to agencies early morning reporting a possible oil anomaly,” the update said before describing the early response:

“Crews from California Department of Fish and Wildlife’s Office of Spill Prevention and Response responded to the report to investigate before sunrise. Conditions were foggy and the crew returned to shore. The Coast Guard and Orange County Sheriff deployed at first light once fog lifted to investigate. A Coast Guard aircraft was diverted to support the investigation. On Saturday morning, the company confirmed a release of oil from a pipeline.”

There’s a lot to still unpack here, but this new information certainly raises several questions that will need to be addressed, especially if (or when) it is confirmed as an anchor.

As we have been reporting, a record number of ships have been anchored near the pipeline as they await to enter the congested San Pedro Bay Port Complex, home to the ports of Los Angeles and Long Beach. Combined, the two ports move approximately 40% of all containerized cargo entering the U.S. each year and about 30% of all containerized exports. The Marine Exchange of Southern California on Friday reported 56 ships at anchor off the ports, including 41 containerships. The image below of the anchorage area was taken Friday, October 1, and as you can see the weather looks calm.

Join the 74,669 members that receive our newsletter.

Hapag-Lloyd Agrees to ‘Eye-Watering’ $130,000 a Day for Panamax Charter

Organizations and unions from across the transportation sector are warning that world leaders’ knee-jerk reactions to the Omicron variant of COVID-19 are putting transport workers and the global supply chain...