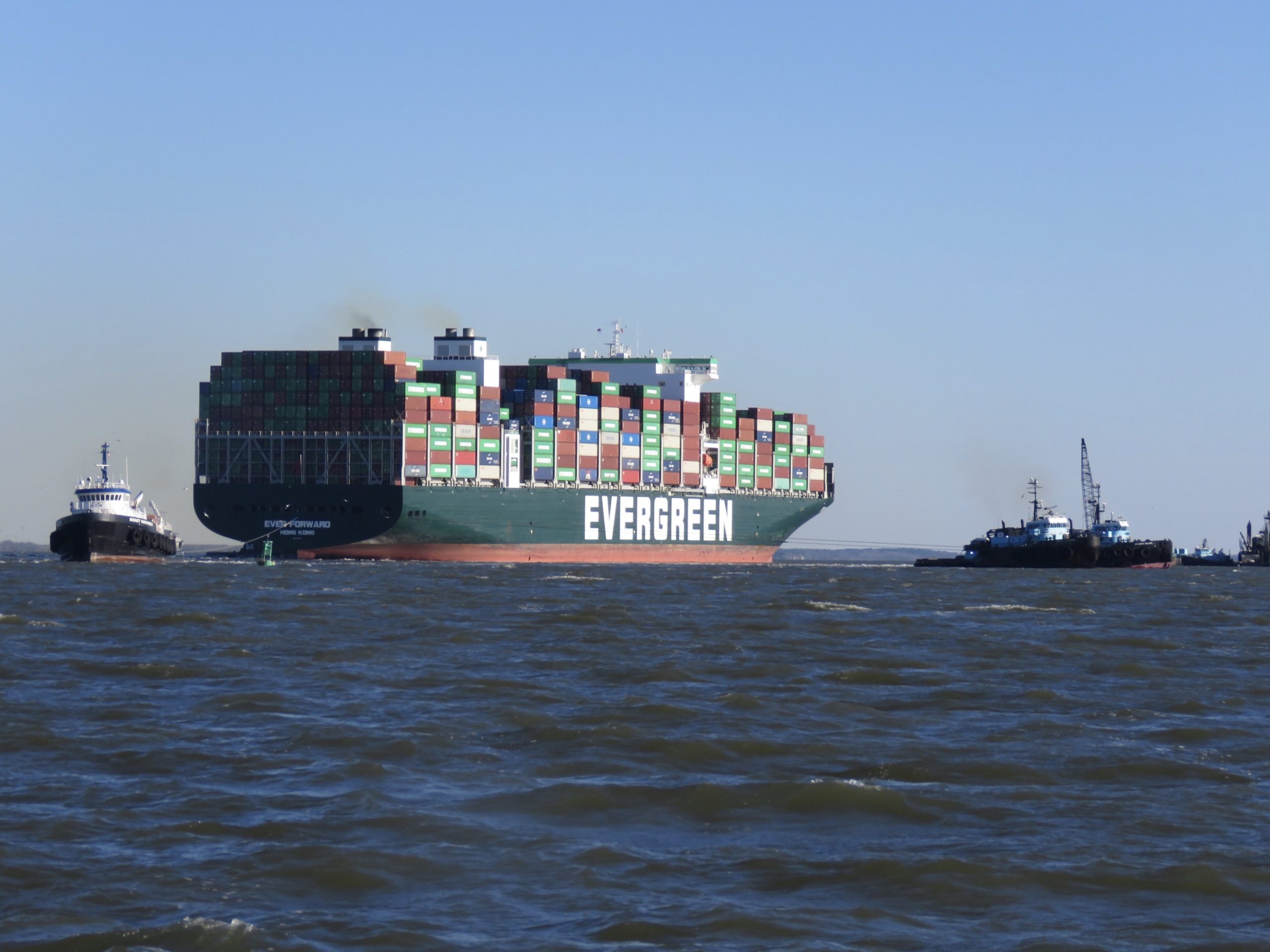 The staging of equipment for the next phase of the Ever Forward refloating operation is scheduled to kick off today in Chesapeake Bay, where the giant containship has been stuck for more than three weeks.

The staging is in preparation for the removal of a portion of the cargo containers and future pulling operation. The next pulling operation, which is tentatively scheduled for Friday, April 15th, will involve two anchored pulling barges pulling on the stern of Ever Forward.

Ongoing dredging to 43 feet around the Ever Forward was expected to be completed yesterday, April 5, according to a Coast Guard Marine Safety Information Bulletin published Monday, April 4.

Container lightering operations are scheduled to commence Friday, April 8, utilizing two crane barges. Only a portion of the reported 5,000 individual containers on board the ship will be removed.

Salvors were originally hoping to refloat the ship without the removal of cargo, but following two unsuccessful attempts last week involving tugboats, the salvors determined they would not be able to overcome the ground force of the Ever Forward in its current loaded condition.

For safety reasons, the cargo operation is expected to take place only during daylight hours. The cranes will lift containers from both the port and starboard sides and place them on receiving barges, which will shuttled the containers back to the Seagirt Marine Terminal in Baltimore where they will be offloaded by shore-based cranes.

The U.S. Coast Guard has been working on the response with the Maryland Department of the Environment and the shipowner, Taiwanese carrier Evergreen Marine Corporation, in partnership with multiple state and local responders. Donjon-Smit, a joint venture between U.S.-based Donjon Marine and Boskalis’ SMIT Salvage, is the designated salvage company.

Mariners in the area are requested to monitor VHF channel 16 for the latest information.

We reached out to the Coast Guard to check if the revised plan is still on schedule, but so far have not heard back.

AIS data from ship tracking and maritime analytics provider MarineTraffic from Wednesday showed the two dredgers, Oyster Bay and Dale Pyatt, still with the Ever Forward.

This website uses cookies to improve your experience while you navigate through the website. Out of these, the cookies that are categorized as necessary are stored on your browser as they are essential for the working of basic functionalities of the website. We also use third-party cookies that help us analyze and understand how you use this website. These cookies will be stored in your browser only with your consent. You also have the option to opt-out of these cookies. But opting out of some of these cookies may affect your browsing experience.
Necessary Always Enabled
Necessary cookies are absolutely essential for the website to function properly. This category only includes cookies that ensures basic functionalities and security features of the website. These cookies do not store any personal information.
Non-necessary
Any cookies that may not be particularly necessary for the website to function and is used specifically to collect user personal data via analytics, ads, other embedded contents are termed as non-necessary cookies. It is mandatory to procure user consent prior to running these cookies on your website.
SAVE & ACCEPT
{"Tags":["ever forward"],"Categories":["Accidents"],"Excerpt":"The staging of equipment for the next phase of the Ever Forward refloating operation is scheduled to kick off today in Chesapeake Bay, where the giant containship has been stuck..."}