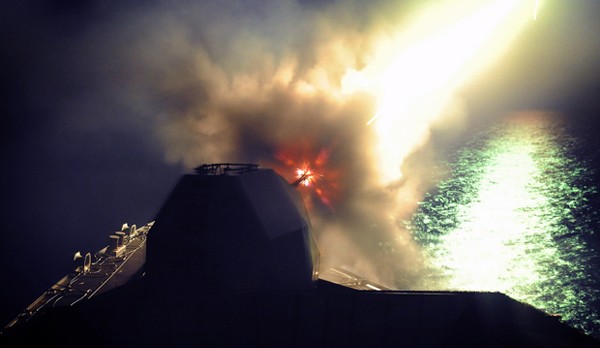 29 July 2011 (Royal Navy) HMS Sutherland practised Naval Gunnery Support (NGS) drills by firing High Explosive (HE) and Star Shell rounds from her 4.5-inch gun. These drills were carried out only 2 days after HMS Sutherland was involved in fire missions off the coast of Libya.

HMS Sutherland has currently been re-tasked to NATO to support Operation UNIFIED PROTECTOR, the mission to protect the people of Libya and enforce the United Nations embargo.

Having been temporarily detached from the RFTG, HMS Sutherland is poised and ready for immediate tasking off the coast of Libya to support fellow Royal Navy and NATO units.

HMS Sutherland is deployed with the lead element of the Cougar 11 deployment as part of the Royal Navy’s Response Force Task Group (RFTG). The RFTG has taken part in multi-national exercises in the Mediterranean before she moved East through the Suez Canal for further exercises in the Indian Ocean.

The Type 23 Duke Class Frigate is capable of operating at high tempo for sustained periods with her highly motivated and well trained ship’s company, and is ready to undertake the full range of tasking to develop and demonstrate the Royal Navy’s contingent capability by remaining flexible to respond to short notice tasking across a diverse range of defence activities including disaster relief, humanitarian aid and amphibious operations.

The RFTG is a new initiative announced in last years Strategic Defence and Security Review and is at the heart of the UK’s maritime contingent capability, held at very high readiness to respond to unexpected global events. The Task Group is commanded from the Fleet Flagship HMS Albion, by Commodore John Kingwell Royal Navy, Commander United Kingdom Task Group (COMUKTG).

Sept 30 (Reuters) – A U.S. Navy sailor was found not guilty on Friday of starting a fire that destroyed the amphibious assault ship Bonhomme Richard in San Diego in 2020. Seaman Recruit Ryan... By Jason Leopold (Bloomberg) — Former President Donald Trump’s White House asked the US Navy to hide a warship named after John McCain on his 2019 visit to Japan, stunning naval...

Jacksonville, Florida-based Crowley has been awarded a contract for the operation and maintenance of six U.S. government-owned Maritime Prepositioning Force (MPF) vessels for the U.S. Navy’s Military Sealift Command.  The...

This website uses cookies to improve your experience while you navigate through the website. Out of these, the cookies that are categorized as necessary are stored on your browser as they are essential for the working of basic functionalities of the website. We also use third-party cookies that help us analyze and understand how you use this website. These cookies will be stored in your browser only with your consent. You also have the option to opt-out of these cookies. But opting out of some of these cookies may affect your browsing experience.
Necessary Always Enabled
Necessary cookies are absolutely essential for the website to function properly. This category only includes cookies that ensures basic functionalities and security features of the website. These cookies do not store any personal information.
Non-necessary
Any cookies that may not be particularly necessary for the website to function and is used specifically to collect user personal data via analytics, ads, other embedded contents are termed as non-necessary cookies. It is mandatory to procure user consent prior to running these cookies on your website.
SAVE & ACCEPT
{"Tags":["British Royal Navy","Featured","photos"],"Categories":["Defense","Multimedia","Navy","Photo"],"Excerpt":"Image by\u00a0LA(PHOT) Keith Morgan, Royal Navy 29 July 2011 (Royal Navy)\u00a0HMS Sutherland practised Naval Gunnery Support (NGS) drills by firing High Explosive (HE) and Star Shell rounds from her 4.5-inch..."}