Although the existence of a southern continent had been hypothesized as early as the writings of Ptolemy in the 1st century AD, the South Pole was not reached until 1911. + Legends of Terra Australis Incognita — (unknown southern land) date back to Roman times and before, and were commonplace in medieval geography, although not based on any documented knowledge of the continent. Scientists, such as Gerardus Mercator (1569) and Alexander Dalrymple as late as 1767 argued for its existence; postulating that a large landmass in the south should act as a counterweight to the known landmasses in the Northern Hemisphere. +

Terra Australis was depicted on the mid-16th-century Dieppe maps, where its coastline appeared just south of the islands of the East Indies. It was often elaborately charted, with a wealth of fictitious detail.

The cartographic depictions of the southern continent in the 16th and early 17th centuries, as might be expected for a concept based on such abundant conjecture and minimal data, varied wildly from map to map. In general, the continent shrank as potential locations were reinterpreted.

1604 copy of a Chinese map which depicts “Magellanica” as a large continent in the South.

Over the centuries the idea of Terra Australis gradually lost its hold. James Cook sailed around most of New Zealand in 1770, showing that even it could not be part of a larger continent. On his second voyage, he circumnavigated the globe at a very high southern latitude, at some places even crossing the south polar circle, showing that any possible southern continent must lie well within the cold polar areas.

Although he failed to see Antarctica, Cook dispelled once and for all the fanciful notion of a fertile, populous continent surrounding the pole. Not surprisingly, the British Admiralty lost interest in the Antarctic and turned its attention instead to the ongoing search for the Northwest Passage.

Almost half a century passed before anyone else travelled as far south as Cook. + On 17 November 1820, American seal hunter, explorer, sailing captain, and ship designer Nathaniel Palmer, steered southward in a diminutive sloop named Hero (47 ft) at the beginning of the Antarctic summer of 1820–1821.

The Antarctic science and research program operated by the US government continues to recall Palmer’s role in the exploration of the Antarctic area. Palmer Station, located in the seal islands that Palmer explored, the clipper ship N.B. Palmer (above) and the Antarctic icebreaker RV Nathaniel B. Palmer are also named after Captain Palmer. Hero Bay, in the South Shetland Islands, is named for Captain Palmer’s sloop.

Along with English sealer George Powell, Palmer also co-discovered the nearby South Orkney Islands, which he annexed for the British. “Commences with open Cloudy Weather and Light winds a standing for a Large Body of Land in that Direction SE at 10A.M. close in with it our Boat and Sent her on Shore to look for Seal at 11A.M. the Boat returned but find no sign of Seal at noon our Latitude was 64°01’ South Stood up a Large Bay, the Land high and covered intirely [sic] with snow the wind coming Round to the North & Eastward with Thick weather.

Tacked ship and headed off Shore… At 4P.M. fresh Gale and Thick weather with snow… Ends with Strong Gales at ENE Concluded to make the Best of our way for the Ship I think this Southern Land to be a Continent…” + leopard seal on the prowl

A seal hunting team headed by Captain John Davis (from Connecticut) may have been the first to have set foot on Antarctica on 7 February, 1821. Some of Davis’ crew from the American sealing ship Cecilia may have landed at Hughes Bay (64°01’S) looking for seals. These men were the first humans to claim to have set foot on the newly discovered continent of Antarctica. They were ashore for less than an hour. The first undisputed landing on Antarctica did not occur for another 74 years; on 24 January 1895, when a group of men from the Norwegian ship Antarctic went ashore to collect geological specimens at Cape Adare. The group included the Norwegians Henrik Johan Bull and Carsten Borchgrevink, and the New Zealander Alexander von Tunzelmann. Jane and Beaufoy at Weddell’s farthest James Weddell (1787 – 1834) was a British sailor, navigator and seal hunter who in February of 1823 sailed to latitude of 74°15′ S (a record 7.69 degrees or 532 statute miles south of the Antarctic Circle) and into a region of the Southern Ocean that later became known as the Weddell Sea.

On 20 February 1823, Weddell (aboard Jane) reached a new Farthest South of 74° 15 S. He probed the waters between the South Sandwich Islands and the South Orkney Islands, looking for new land. Finding none, he turned southward down the 40°W meridian, deep into the sea that now bears his name. South Georgia, Antarctica & the Southern Ocean on a Tall Ship

Unaware that he was close to land, Weddell decided to return northward from this point, convinced that the sea continued as far as the South Pole. Another two days’ sailing would likely have brought him within sight of Coats Land, which was not discovered until 1904 by William Speirs Bruce during the Scottish National Antarctic Expedition, 1902–04. 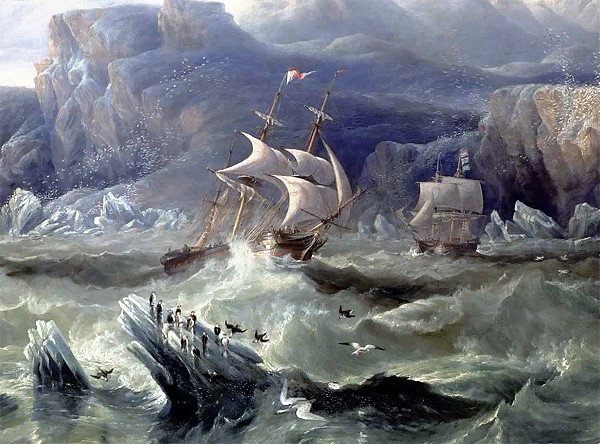 HMS Erebus and Terror in the Antarctic James Clark Ross‘s 1839–43 Antarctic expedition in HMS Erebus and HMS Terror was a full-scale Royal Naval enterprise, the principal function of which was to test current theories on magnetism, and to try to locate the South Magnetic Pole.

Erebus and Terror were bomb vessels – an unusual type of warship named after the mortar bombs they were designed to fire and constructed with extremely strong hulls, to withstand the recoil of the mortars, which were to prove of great value in thick ice. +

Ross had considerable past experience in magnetic observation and Arctic exploration; in May 1831 he had been a member of a party that had reached the location of the North Magnetic Pole, and he was an obvious choice as commander.

The expedition left England on 30 September 1839, and after a voyage that was slowed by the many stops required to carry out work on magnetism, it reached Tasmania in August 1840. Following a three-month break imposed by the southern winter, they sailed south-east on 12 November 1840, and crossed the Antarctic Circle on 1 January 1841.

On 11 January a long mountainous coastline that stretched to the south was sighted. He followed the coast southwards and passed Weddell’s Farthest South point of 74°15’S on 23 January. 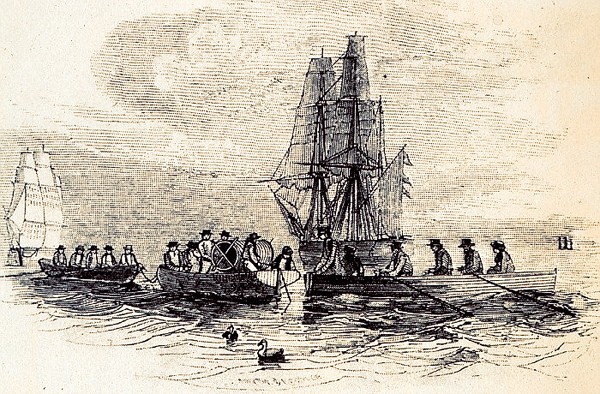 A few days later, as they moved further eastward to avoid shore ice, they were met by the sight of twin volcanoes (one of them active), which were promptly named Mount Erebus (the southernmost active volcano on earth) and Mount Terror, in honour of the expedition’s ships.

The following season Ross returned and located an inlet in the Barrier face that enabled him, on 23 January 1842, to extend his Farthest South to 78°09’30″S, a record which would remain unchallenged for 58 years. He was elected to the Royal Society in 1848 and knighted in 1844. In this Feb. 11, 2013 photo released by Shackleton Epic, expedition leader Tim Jarvis poses on the deck of their boat Alexander Shackleton in the Southern Ocean (more)

OK, so who else watched Black Sails, and how much did it SUCK????

Adventures of the Blackgang on Tumblr or Twitter
Maritime Monday Archives