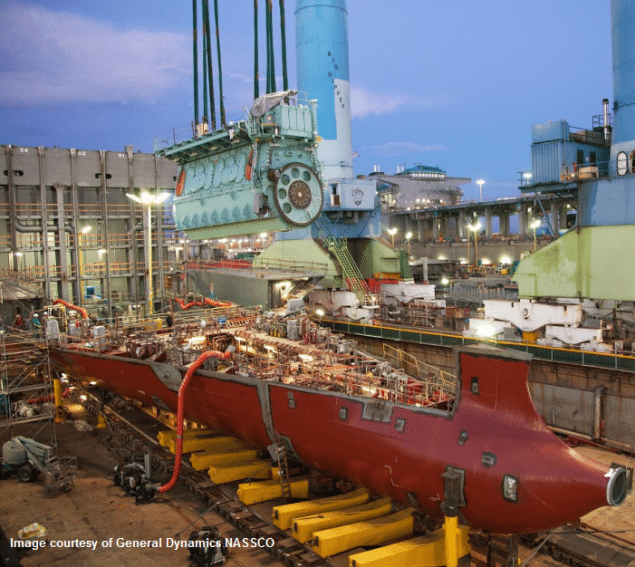 The world’s first LNG-powered containership is really beginning to take shape at the NASSCO shipyard in San Diego with the installation of the ship’s main engine.

Late last month, engineers lowered the 539-ton engine into place aboard the first of two new Marlin-class containerships being built for Tote, Inc. The engine itself is also significant because it is the first commercial installation of the new ME-GI engine, a dual-fuel, low-speed two stroke, from MAN Diesel and Turbo. The 8L70ME-C8.2GI engine was built under license from Doosan Engine in South Korea and delivered to the shipyard in July.

“This large slow speed (two stroke) dual fuel engine is the first of its kind in the world” noted Phil Morrell, Vice President of Commercial Marine Operations for TOTE Services, the division of TOTE that is responsible for ship’s technical management and crewing. “Using this engine in our new Marlin class vessels will not only drastically reduce our SOx, NOx, particulate matter and greenhouse gas emissions as a result of using liquefied natural gas, but it will also improve our efficiency meaning these ships will require less energy to travel the same distance and help preserve the environment.” Tote’s two 3,100 TEU Marlin containerships are being constructed at General Dynamics NASSCO shipyard in San Diego shipyard and are designed by DSEC, a subsidiary of Daewoo Shipbuilding & Marine Engineering (DSME) in South Korea. The design is based on proven containership-design standards and will include DSME’s patented LNG fuel-gas system and a single ME-GI main engine.

The new ships will operate in the U.S. Jones Act market between Jacksonville, Florida and San Juan, Puerto Rico. The first vessel, Hull 495, is expected to enter service in late 2015 with the second ship following in early 2016. Tote also has the option to build up to three additional vessels.

Join the 75,714 members that receive our newsletter.