It’s said that a photo speaks a thousand words, which is why we bring you the top maritime tsunami photos from the earthquake that struck Japan. 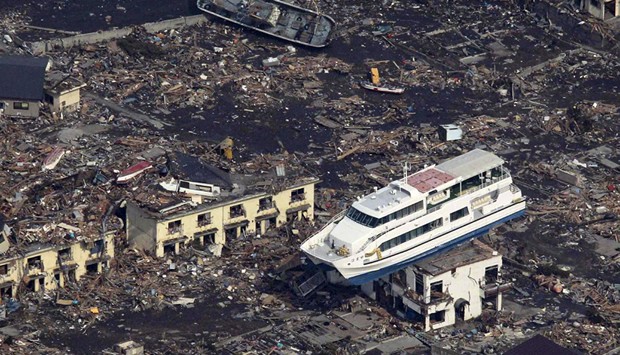 A ferry sits on top of a building amid a sea of debris in Otsuchi town in Iwate prefecture on March 14, 2011. (Yomiuri Shimbun). The 4,724-ton freighter M.V. Asia Symphony lies on a pier after being hit by the tsunami at the port in Kamaishi city, Iwate prefecture on March 16. All 17 Filipino crew (next picture) are safe and living at an emergency shelter near the port. (Toshifumi Kitamura) Cargo containers are strewn about in Sendai Japan March 12. Japan launched a massive military rescue operation Saturday after a giant, earthquake-fed tsunami killed hundreds of people and turned the northeastern coast into a swampy wasteland, while authorities braced for a possible meltdown at a nuclear reactor. (Itsuo Inouye) A fishing boat rests surrounded by debri in the city of Kamaishi in Iwate prefecture on March 12. (Yomiuri Shimbun) A Japanese home is seen adrift in the Pacific Ocean. Ships and aircraft from the Ronald Reagan Carrier Strike Group are searching for survivors in the coastal waters near Sendai, Japan. Another house adrift at sea off the coast of Japan (Unknown)