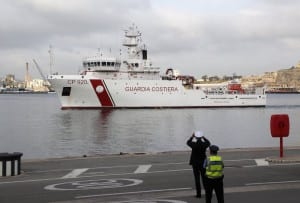 The Italian coastguard ship ‘Bruno Gregoretti’, carrying dead immigrants on board, arrives in Senglea, in Valletta’s Grand, Harbour, April 20, 2015. As many as 700 migrants were feared dead on Sunday after their boat capsized in the Mediterranean, raising pressure on Europe to face down anti-immigrant bias and find money for support as turmoil in Libya and the Middle East worsens the crisis. REUTERS/Darrin Zammit Lupi
MALTA OUT. NO COMMERCIAL OR EDITORIAL SALES IN MALTA

Photos: Section One of Golden Ray Wreck Cut and Lifted Onto Barge

Crews have finished cutting and lifting the first section of the wreck of the Golden Ray, marking a major milestone in the wreck removal project. Preparations are now underway for...