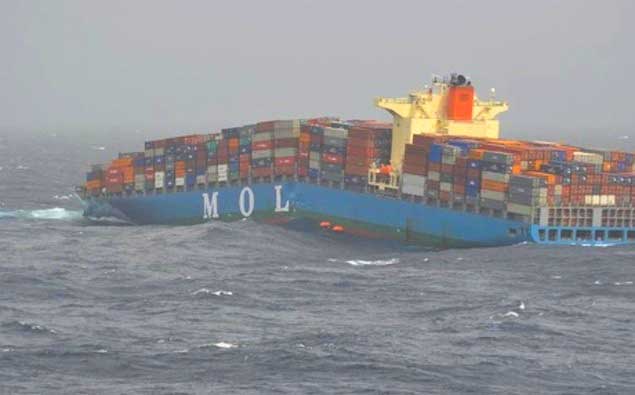 Pretty much the entire world was caught by surprise when images of a huge crack in the fully laden containership MOL Comfort surfaced last summer. The ship design rules at the time should have mitigated such a situation from ever happening.

While conducting research for her PhD thesis at the Technical University of Denmark, Ingrid Marie Vincent Andersen, PhD had found clues prior to this incident suggesting the possibility of catastrophic failure was more real than previously thought.

Digging deep into the hydro-elastic structural response of containerships similar to the MOL Comfort, she had discovered some very interesting details.

Clearly, the ship had broken up when the hull girders failed, but what led to that failure was not so obvious. She, like many others, say it very likely had a lot to do with the cargo loading condition of the ship, but the full answer was quite a bit more complicated than that.

Anderson says the MOL Comfort and her sister vessels were simply under engineered by naval architects that didn’t fully account for enormous additional loads which were being placed on the ship.

“It is believed that the hydro-elastic effects and the effect of hull girder flexibility are capable of significantly amplifying the hull girder stresses and thus contribute to fatigue damage as well as to the extreme hull girder loading in container ships,” Andersen notes in her PhD thesis.

In her research, she studied ships in the 8000-9000 TEU range and discovered, “the hull girder vibrations due to hydro-elastic effects is capable of doubling the stress response amidships in some cases – also in the extreme loading cases.”

LR notes the principle design challenge inherent to large and ultra-large containerships is the combined effects of whipping, springing and warping/distortion of the hatch openings.

Until recently, Andersen notes that hydro-elastic effects have not been directly taken into account for in the classification societies’ design rules for container ships. In 2014, LR updated their design rules to reflect the discovery of much higher loadings inside the structure of containerships.

Andersen, White and Wang all cite strain data captured aboard a 2006-built CMA CGM 9,600 TEU containership over a four year period showing severe spikes in the vertical bending moment as wave strikes on the bow resonate down the ship.

The following video was produced by Anderson as part of her thesis to show the global structural response of these wave loads on a containership:

Thee traditional codes have a realized safety factor of around 200 percent.

Anderson notes that due to a large uncertainty around sea state conditions a vessel will encounter, maximum wave loading is subsequently uncertain. Wave loading is compounded by containerships that opt for greater cargo space forward, and thus greater bow flare such as on the MOL Comfort and the ultra-large 14,000 TEU+ sized vessels that are currently in operation.

“The high strength steel used for the construction of the ship will result in a slightly lower natural frequency and possibly, together with the pronounced bow flare, making the vessel more susceptible to whipping vibrations,” adds Anderson.

Since the MOL Comfort sinking, all of the sister vessels to the MOL Comfort have been retrofitted with additional structural steel, but certainly other ships in that size range have not.

Considering the step changes being made in containership design, logic would dictate that additional study and consideration be taken when designing and operating such vessels, including the installation of strain gauges to properly measure what is happening inside the ship.